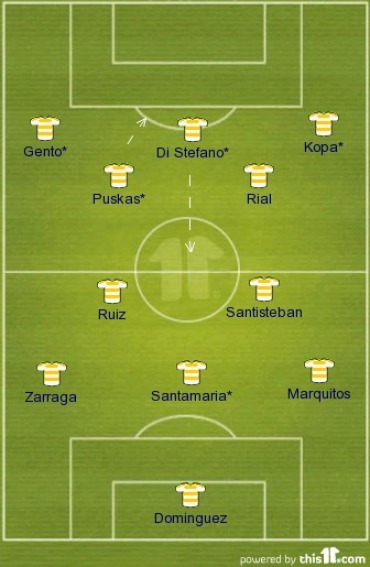 This is perhaps the greatest club side of all time. It is certainly the most successful - having won the European Cup for an incredible five times consecutively after its inception. Di Stefano is the common link and the greatest player in this team of a stars - starting as centre-forward but dropping back to midfield, and even helping to organise the defence. Gento was one of best left wingers in history and the team gained a star to rival Di Stefano when Ferenc Puskas joined in 1958 after defecting from communist Hungary. He would play at inside left but frequently moved into space in the box and was a great goalscorer. His arrival forced the legendary French playmaker Raymond Kopa onto the right wing, where he was also superb. Complementing these attacking players Santamaria was the rock at central defence.

The team on the left is the strongest line-up in this period - after Puskas arrived and before Kopa left the club, to be replaced by the talented Luis Del Sol. This team would have played in the 1959 European Cup Final but for the surprise last minute omission of Puskas, who was not liked by the coach, Carniglia. Miguel Munoz replaced Carniglia the following season and Puskas played in the next European Cup Final: the 7-3 victory against Eintracht Frankfurt which is commonly considered to be the greatest football match of all time. Puskas and Di Stefano were both still playing when the team made the Final in 1962 and 1964. By the time they won it in 1966 it was largely a different team, although Gento was still there, making him the player that has won more European Cups than anyone else. This was a team of stars, an idea which has defined the club to the present day. In that way, this team bears more than a few similarities to the Galacticos side of the early 2000s. However, this team was much better balanced and much more successful.