This is  Football's Greatest... the ultimate soccer hall of  fame

This is the place where legends live. It is a compendium of the best world football players of all time. See video clips of these greatest teams and players in  action - all the best goals and moves. These famous, and not so famous, names have been carefully arranged according to their best playing position. With information on over 500 players and 40 teams this should be a  useful resource for football enthusiasts everywhere.

We pride ourselves on the comprehensiveness of this collection. The names here span all eras, back as far as the start of the twentieth century and as recently as the 2014 World Cup, and is truly global in its span. There should be no bias, in geography or time, as all players should be here on merit. Whilst it is notoriously difficult to compare footballers across eras we have chosen the best players from their own playing days. As a rule of thumb, to qualify each player must have been amongst the best three of four players in their position in the world during the height of their
playing career. 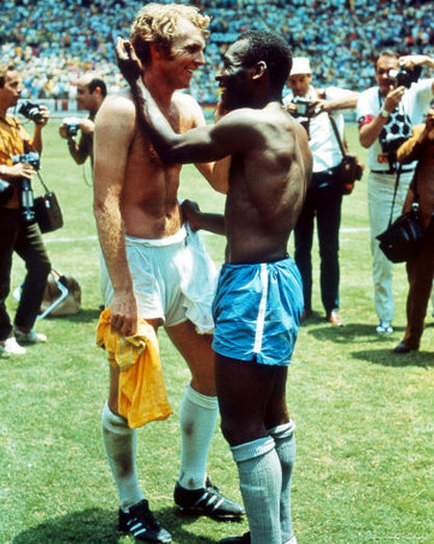 The other part of the website is the selection of the best teams of all time. These are the club and national sides that have represented the greatest sides of all time. They contain many of the great players listed here but they also proved that true teams are greater than the sum of their parts.

This is not the last word, it can never be. Instead we hope it is the first step to a stimulating debate. This website is interactive. Whilst we have identified a group of players for each position they are not placed in any order and we may have missed some! Or included some players that you do not feel are worthy of such praise. And which of the greatest teams included do you feel were the best of all time? Please help us by telling us what you think. Ultimately we would like you to use the lists, and the example of the inspirational teams included, to name your own dream team, with the world's finest in each position. So, what are you waiting for? Start exploring!